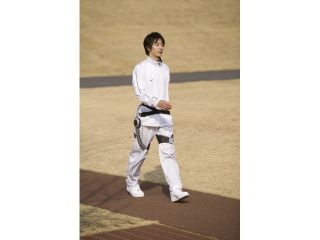 They may be both ubiquitous and popular, but we bet Crocs can't do what these shoes from Japan are capable of - providing electricity for your gadgets.

NTT's unnamed prototypes provide 1.2W of power simply by harnessing the energy expended during walking. While that's not very much – it won't power a phone, for example – it is sufficient to keep an iPod or similar going.

Each sole is filled with water that compresses when trodden on, causing tiny turbines in the liquid to spin and generate electricity. Because the shoes can't store the power, it needs to be used right away to provide a steady flow.

In other words, if anyone were to hook NTT's platforms up to an iPod, they'd have to keep walking to listen to music.

NTT says it wants to commercialise the technology within a couple of years, so can we suggest they target the fitness market, particularly people with no power sockets in their own homes?