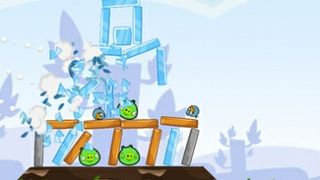 Someone get those Angry Birds some therapy

Rovio's hay-making continues under a blazing hot sun, as it announces that Angry Birds: The Movie will hit cinemas in summer 2016.

The company has signed John Cohen as producer of the 3D CG-animated feature film. You may not remember Cohen from such production credits as Despicable Me which was actually not bad and Hop which was terrible.

We can also thank Cohen for having the idea to "reimagine Alvin and the Chipmunks and develop[ing] the 2007 film".

Anyway, let's not judge the man on Alvin and the Chipmunks and be grateful that David Maisel is also on board, who executive produced Iron Man.

Rovio is steering well clear of the Hollywood studios and their money-grabbing, red-tape-loving ways by producing and financing the film independently, retaining full creative control of the Angry Birds.

Angry Birds is the little app that could, with Rovio's savvy ensuring that it was never a flash-in-the-pan like Draw Something­.

To date, the game has spawned multiple editions (including Angry Birds Star Wars), toys, books, t-shirts, animations and even a tie-in with one studio film, Rio.

Whether a full-on ninety-minute Angry Birds film will be any good or leave audiences wanting to catapult sharp-beaked fowl at Rovio HQ is something we now have three years to ponder.