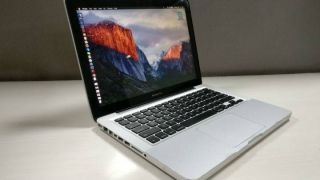 Apple is apparently phasing out the old 13-inch MacBook Pro without Retina Display from its shops over in the US, most likely preparing the ground for the refreshed model to hit shelves later this year.

This is according to Apple Insider, which received a tip from an unnamed source who said that while the old 13-inch MacBook Pro was still in stock across the majority of Apple stores, outlets were no longer putting the device on display for punters to try out.

The 12-inch MacBook pro without Retina display was launched way back in 2012 and comes with an Intel Core i5 'Ivy Bridge' processor, 4GB RAM, 500GB HDD and integrated Intel HD Graphics 4000. Lets compare this to the cheapest 13-inch Retina MacBook Pro on offer.

So, the display is much better, it comes with twice the amount of RAM, flash storage as compared to an old 5,000rpm hard-drive and better graphics. So why should you buy the non retina 2012 MacBook Pro over the base Retina model?

Well, there are several reasons.

Firstly, the price. While there is not that much of a price difference in the official MRP's of the products, with the 2012 model at Rs 89,990 and the newer Retina version at Rs 1,06,990, the street price is a different story. On Amazon India, the 2012 MacBook Pro is available currently for Rs 59,239 while the entry-level 13-inch Retina model is going for Rs 89,994. That's a difference of a whopping thirty thousand rupees.

Secondly, it is the only MacBook Pro available currently with a DVD drive, which is still important to some users. It also has an ethernet port and a FireWire 800 port, and doesn't need any finicky adapters like the latest Retina MacBook Pros.

Thirdly, it has battery notification LED's on the left edge, next to the headphone jack. This is an insanely useful feature, and allows you to check your battery level at the push of a button, without even having to open the lid of the MacBook Pro.

Lastly, and this is the kicker, is the fact that this was the last MacBook Pro that Apple made which was upgradable. You can change the HDD and the RAM without voiding the warranty. Thus you can turn the MacBook Pro 2012, with it's middling 2012 specifications into a laptop that can easily rival any 2016 competition for a few thousand bucks.

What's even more interesting is that by ordering a HDD caddy from Amazon India, you can replace the DVD drive of the MacBook Pro, and insert the old 500GB HDD (or even another SSD in raid configuration!) in it's place.

However, it must be noted that you will have to live with the non-retina screen and the weak Intel HD 4000 Graphics.

You can learn how to upgrade the RAM in your non-retina MacBook Pro here  and how to install an SSD here.

Also Read:   Apple finally phases out its oldest MacBook Pro and you can stay safer online with a VPN for Mac