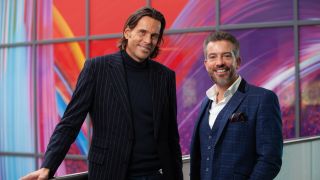 Virgin Media’s mobile network will be powered by Vodafone’s infrastructure from 2021, switching from the BT-EE network it has used for the past two decades.

The world’s first Mobile Virtual Network Operator (MVNO) launched in 1999 under the guise of Virgin Mobile and using what was then One2One’s network. It was then brought under the Virgin Media umbrella following the 2007 merger of NTL and Telewest and now has three million subscribers.

An extension to the agreement with BT Enterprise was reached in 2017 and allowed Virgin Media to operate a ‘deep MVNO’ in which it controlled billing, SIM cards and other network components. All customers are expected to be migrated by the end of this year.

Because of the deep MVNO infrastructure, customers should experience limited disruption and won’t even need to change their SIM cards.

A five year has been agreed between Virgin and Vodafone and extends until 2026. Virgin Media will have access to the full range of Vodafone technology and services – including 5G. Indeed, Virgin Media 5G will be powered by Vodafone even before the present deal with BT expires.

“This agreement with Vodafone will bring a host of fantastic benefits and experiences to our customers, including 5G services in the near future,” declared Lutz Schüler, Virgin Media CEO. “We’ve worked with BT to provide mobile services for many years and will continue to work together in a number of areas.”

“We are delighted that Virgin has recognised the huge investments we’ve made, and continue to make, in building the UK’s best mobile network and our role in challenging the market with new commercial services,” added Vodafone UK CEO Nick Jeffery. “As a result, they have chosen us to work with them in the next phase of their development.

“This is an exciting deal between two great British brands. We are combining our strong heritage in innovation to create a world without limits for our customers through unlimited data offers and 5G.”

The expansion of Vodafone and Virgin Media’s relationship will increase speculation of a more formal association in the future. Virgin’s parent company Liberty Global and Vodafone have discussed “asset swaps” in the past, discussions which led to a joint-venture in the Netherlands, while Vodafone has since purchased Liberty’s central European cable assets.

It is understood that the UK was never a market under consideration, but former Vodafone Group CEO Vittorio Colao refused to rule out future talks. The combination of Vodafone and Virgin Media would allow for the creation of converged networks services that could compete with BT-EE.