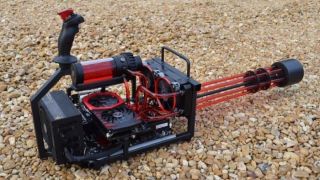 Just look at that thing. The folks at Geek Seek went and built an insane, all-AMD gaming PC shaped and style like a minigun.

In a homemade video, the younger of the two Geek Seek guys describes wanting a black-and-red color scheme for the build, thus his choice in graphics and processor.

Oh, and the whole thing is liquid-cooled with deep crimson coolant. Ooh – also it has a flight stick trigger stand in as the power button.

A ton of soldering and sawing was involved to create this metal, acrylic, silicon and plastic beast, all detailed in their below video.

Sight of this glorious gaming rig got us searching around for an idea of what the overall case modding game is like these days. Turns out, the game is more real than it’s ever been – just look at these custom cases!

This is basically the whole idea Nintendo + PC being the ultimate gamer combo epitomized. Screw copyright, this thing is amazing, from the custom liquid cooling tubing to the practical World 1-2 recreation inside.

Dude, this thing looks ripped straight out of Vault 13. Man, now this apocalyptic work of art is just reminding us of how close we really are to needing Vaults. Moving on!

This guy looks awfully similar to the minigun build, what with its exposed components and roll cage trappings. Take a closer look and you'll notice l3pje actually cut out parts of the frame and replaced it with hard piping, turning the case itself into part of the cooling system. Come to think of it, it looks like the payload in any given “disarm the bomb” mode – coincidence?

Who would have thought you could pull off steampunk in a gaming PC build, but this looks the closest to pulling it off we’ve seen. It’s like we’re looking at the center console of a dogfighter soaring over the trenches.

This one might just be a metal skin over one of Fractal Design’s cube-like cases, but damn if it doesn’t look dope. This case looks like it’s holding something dangerous inside. Here’s to hoping it’s cooled well.

Uhh … umm. So, where’s the Millennium Falcon one?

This is the kind of gaming PC you'd only find at Maker Faire, right?

I put in some lighting, #led #doom #casemod #pcgamer #pcgaming

No, John, your PC is the demons. The frosted glass really seals the deal. It’s like the Cake Wars winner of case mods.

Do you think you can catch this one? #gottacatchemall #pikachu #pokemon #casemod #pokecase #pokemongo #pokeball #MakeItYours photo by @a45857642

OK, remember how that Super Mario case united two of our favorite worlds together? This one does it better – it has a damned tail!

If you were inspired by the minigun PC build that inspired this spiral into insane PC case mods, then you could try to build something similar using the same parts to get that red look. Just don’t weld or solder without the proper equipment, adult supervision and all that good stuff.