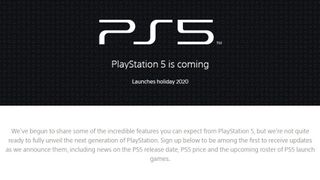 Sony has quietly launched the PS5's official website ahead of the next-gen console's release in late 2020.

Initially spotted on Reddit (via GamesRadar), the website offers fans the chance to sign-up "to be among the first to receive updates as we announce them, including news on the PS5 release date, PS5 price and the upcoming roster of PS5 launch games".

The website is currently live in the UK and Germany, its Australia and US counterparts haven't launched yet.

It's starting to look more and more likely that a PS5 reveal event is just around the corner.

There are been several rumors which suggest a PS5 reveal event will take place in February and, now that it's actually February, we're on tenterhooks waiting for Sony to make an official announcement.

On the other hand, a contradicting leak suggests that the reveal won't be until March, with pre-orders becoming available shortly after.

Regardless of whether the PS5 reveal event is in February or March (or perhaps later) we're expecting it in the near future, especially as Sony has filed trademarks for the PlayStation 5 in several countries. The launch of the PS5 website has just added further fuel to the fire.