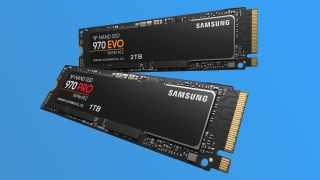 Samsung must have felt its ears were burning, with competitors left and right announcing solid-state drives with speeds and prices designed to outdo its 960 Pro and 960 Evo lines.

Well now Samsung has struck back by introducing a new series of 970 Pro and 970 Evo SSDs that once again set a new benchmark for lightning-fast storage.

The 970 Pro specifically reaches up to 3,500 MB/s and 2,700 MB/s sequential read and write speeds, respectively, which Samsung claims to be 30% faster than the last generation.

Meanwhile, 970 Evo is rated for the same 3,500 MB/s sequential read speeds, but sequentially writes at a slightly slower 2,500 MB/s. Still that’s a more than 65% improvement compared to the 960 Pro.

Samsung has upgraded both of its NVMe SSDs with its latest 64-layer V-NAND and a newly designed Phoenix controller. The updated Pro and Evo lines also utilize Intelligent TurboWrite technology, which supports up to 78GB of buffer for faster write speeds.

Samsung promises its new 970 drives are as reliable as ever. On top of a five-year warranty, both the Pro and Evo line are backed up by an up to 1,200 Terabytes Written guarantee.

To help the SSDs survive through all those bytes, Samsung has built its latest storage units with a heat spreader and new nickel-coated controller to keep temperatures down, while Dynamic Thermal Guard technology will automatically monitor and maintain the SSDs at a safe operating temperature.

Prices for the Samsung 970 Pro and 970 Evo series are as follows:

Both SSDs will be available for purchase from May 7.