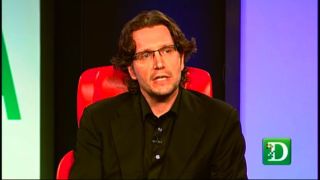 Updated: Intel's TV service won't be confined to just television screens, according to a report from CNET.

The publication spoke to Huggers following Tuesday's event and he said that the service will make its way to mobile devices, though it will take time to bring phones and tablets into the fold.

An Intel-produced web TV service is in the works, Corporate Vice President at Intel Media Erik Huggers has confirmed, putting to bed rumors that such a product was indeed under development. The product won't have Intel branding, though it is as yet unnamed.

"We have been working for about a year now to set [up a] group called Intel Media," said Huggers during a D: Dive Into Media discussion Tuesday. The event, featuring discussions with leaders from around the industry, is hosted by AllThingsD.

"It's a new division with new people - people from Apple, Netflix, and Google. And it's devoted to developing an internet television platform."

The service won't be without an Intel-powered set-top box, available directly from the firm and featuring a "fantastic industrial design." Huggers said he expects consumers will be able to get their mitts on Intel's television workings in 2013.

According to the VP, Intel's service will offer live TV as well as on-demand, "catch-up TV" and apps.

Users will have to pay for both the set-top and ability to watch TV online. Programming will come in bundles, much like what's offered through major cable companies. Though Intel aims to make a better product, it won't necessarily be cheaper than what's already available.

In what will likely make some consumers squirm, a camera will call the set-top box home, watching users' movements and noting viewing habits with the objective of providing a personalized viewing experience. Advertisers will naturally benefit from this arrangement, as well.

When asked by a member of the media why even bother with the project, Huggers replied that it was part of creating a "best" TV experience for consumers.

"If we want to deliver the experience that we have in mind for the living room, there is no platform out there today that could deliver," he said.

"[You] need to control everything - the chip, the operating system, app layers, the sensors. That's sort of the reason why we're there. If there were platforms that could deliver exactly what we had in mind, we would work with that."