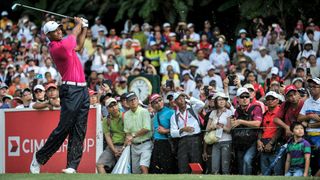 Sky Sports claims that revolutionary new technology used during its coverage of The Open golf this week will reveal to viewers the secret to a perfect pro golf swing.

During broadcasts from the 148th Open Championship in Royal Portrush, Sky's pundits will be making use of its new ‘Sky Scope’ feature which allows presenters to analyse the techniques of star players using holograph replicas of each golfer.

Players such as Rory McIlroy, Dustin Johnson and John Rahm have been visiting Sky’s mobile capture facility during practice session downtime to have special filming sessions.

The footage is used to create lifelike holographs which are then transported to Sky’s Open Zone studio, allowing the Sky Sports team to analyse, track and pause the players movements in 360 degrees.

The new Sky Scope’ tech uses volumetric capture, similar to that used in high-end VR productions and has been developed as part of a partnership between Sky Sports, robotic camera control rig maker MRMC and VR production studio Dimension.

Jason Wessely, Head of Golf at Sky Sports, said: "We're always looking at how we can use innovative technology to bring golf fans closer to the action - nowhere more so than at The Open, where we first introduced our interactive studio, the Open Zone.

"The technology that MRMC have provided will allow us to analyse the golf swings of the world's best players in a way that hasn't been possible before. I know that the Sky team can't wait to showcase this ground-breaking TV innovation."