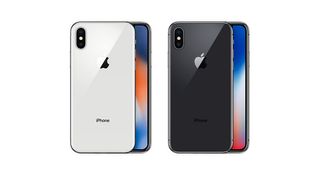 Apple and Samsung have always made for strange bedfellows, and a new report from analytics firm Counterpoint Technology illustrates just how weirdly symbiotic that relationship can sometimes be.

Case in point: Samsung may end up making more money from parts for the upcoming iPhone X than it will make from those inside its own Galaxy S8, as the The Wall Street Journal reports.

Apple has always had a hard time divorcing itself from Samsung’s chips and similar products, and that remains true for the iPhone X and its Samsung-made NAND flash memory chip and DRAM chip.

This year, though, the wild card is the iPhone X's inclusion of a Samsung-made OLED display over the "Retina" displays of the iPhone 8 and iPhone 8 Plus.

With all those parts stuffed into Apple's 10th anniversary gadget, this means Samsung can expect a tidy profit of around $110 (about £85 / AU$140) per iPhone X sold.

If Apple sells 130 million iPhone X units within the first 20 months, as Counterpoint believes it will, then Samsung will make roughly $14.3 billion (about £10.8 billion / AU$18.3 billion) from those sales.

Counterpoint claims that Samsung makes $202 (about £155 / AU$260) off of each Galaxy S8 it sells, and the firm expects 50 million units of the Android smartphone to move within its first 20 months.

All added up, that means Samsung will likely make $10 billion (about £7.5 billion / AU$12.8 billion) from its own devices. The iPhone X, the analysis claims, may bring in about $4 billion more.

Apple no doubt saw this coming, and it may be a major reason why the company was comparatively slow to adopt OLED displays. It may also be a reason for the iPhone X's comparatively high price at $999 / £999 / AU$1,579 to start.

So, why not just use another manufacturer? Well, look at those numbers. Apple typically sells a massive number of iPhones, and it needs a manufacturer that lives up to those kinds of demands within the desired time frame while still maintaining the quality Apple desires.

Few if any other manufacturers are in a position to meet those demands. As Korean news site ETNews reported last August, Samsung committed the entirety of its OLED display manufacturing line to displays for what would become known as the iPhone X, leaping in production from 15,000 displays per month to 105,000.

Apple has often tried to break out of this arrangement, but with mixed success. Beginning in 2014, Apple began using TSMC to make its A-series chips for its phones, but apparently the Taiwan-based company couldn't keep up. As AppleInsider reported last July, Apple switched back to Samsung for the iPhone X.

Get the best iPhone X deals before anyone else!

We'll send you pre-order details and the best iPhone X deals as soon as they're available.