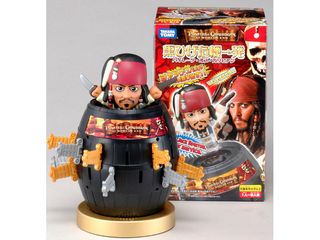 Marketing branding is a fact of life but digital audio does it with style.

Proving that nothing is sacred in the world of traditional toys, TakaraTomy has equipped the Japanese children's favourite Blackbeard game with a digital audio player as part of a Disney-led marketing push.

The special edition Pirates of the Caribbean Blackbeard game [ PDF link ] replaces the lovable jolly pirate of yore with a plastic Johnny Depp, who recites various lines from the latest film, ' At World's End ', while players try their best to stab him with swords.

Apart from our favourite line uttered often by tech reporters at interminable press conferences about jumbo TV sets ("Oh, do get me out of here"), the plastic Depp's most appropriate witticism has to be "Not good! And I mean that!" Yours for ¥2,940 (£13) if you happen to be in Japan from 26 April.