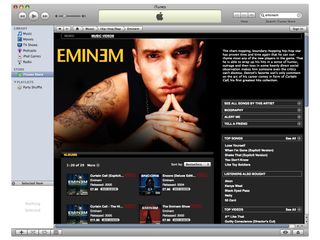 In addition to the higher-profile announcements surrounding Google TV and Android 2.2, Google also outlined its plans to take on Apple's dominance of the online and digital music industry, using

to offer Android users the opportunity to buy music online and have it automatically synced and streamed to their mobile phone.

In addition to this, users will be able to access all the digital music that they own and store on their hard drives on their PCs at home – very much like you can already do if you own and use Simplify's wonderful iPhone app (which disappeared from the App Store with little fanfare following the company's acquisition by Google).

In turn, Apple's recent purchase of LaLa – which will soon let users do very much the same thing, streaming music from their home PC to their iPods or iPhones – is a clear indicator of the future direction of how digital music will be licensed, purchased and distributed.

The only real question now about the cloud-based plans that Apple has for iTunes is simply this - "when are they going to announce them?"

Another Android-based music streaming service called mSpot, was also demonstrated to industry and press at this week's I/O event, showing that Google is certainly more than open to healthy competition in this space.

mSpot is currently in a private, invitation-only beta and is set to be launched to the general public next month. Again, the service synchronizes the user's personal music library to the cloud where the user can then access it using any Android mobile or any PC or Mac.

The free version of mSpot will only allow users to store up to 2 gigabytes of music online and the company is planning a 10 gigabyte and 20 gigabyte premium service for $2.99 and $4.99 respectively, for US users initially. Plans for an unlimited storage option are still to be finalised.

mSpot CEO Daren Tsui said: "We recognize that portability is key to a compelling music experience for consumers, and the biggest challenge for music cloud services to tackle today. mSpot has spent the past five years perfecting its proprietary over-the-air delivery technology so music plays from the cloud so fast it feels local - even when cell coverage is spotty or non-existent."

Google's own music-streaming-on-the-go plans are based around one objective – to make syncing music to multiple devices as easy as possible for non-techie music fans. As such, the demo that Google showed off highlighted how you will be able to purchase a tune using your PC and have it automatically added to your Android device – with no need to even install extra apps to your mobile or to sync it with messy wires to your PC.

It's a compelling proposition, although details on Google's deals with any of the major labels are still to be revealed. And, of course, Apple has the 'elephant in the corner of the room' in the shape of its immense iTunes music store. Will Google create its own store? Or will it partner with others such as Amazon or 7digital? All of these questions are still to be answered.

Via Musicweek.com and ZDNet.com and Wired.com