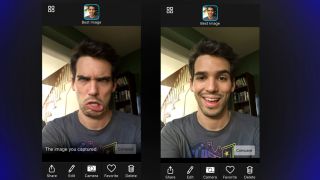 As impressive as iPhone cameras are nowadays, it's still easy to screw up a photo op with bad lighting, wobbly hands, blinking eyes, or someone sneezing as soon as you take the shot.

At least, that was the case. Thanks to Microsoft's newly launched camera app for iOS, the days of "take a second one - just to be sure" may be an obsolete concept.

Making its debut on the App Store today, Microsoft Pix combines burst photography and smart image editing in one place, scanning your photo subject and extracting the best-looking shot, all while automatically enhancing it so there's no need to mess around with settings or filters after.

Smartphone in hand, we put Pix to the test to see exactly how the smart camera works, as well as see if Microsoft's latest could really replace our standby camera apps.

When you press the shutter button on your phone, Pix takes a moment to comb through individual frames it captured just before and after that moment using an algorithm that looks for shots that, say, are clearer or have everyone smiling with their eyes open.

From there, Pix presents the one (or sometimes multiple) shots it deems best, already edited for exposure, color correction, and noise reduction. If you like the results, every other shot is deleted - ensuring all that burst photography doesn't eat up your storage.

The smart camera can also piece together a special lil' something-something in the form of a Live Image, which detects interesting motion like flowing leaves or running water to make a breathing looping photo in addition to a still, like this one here accompanying the image below.

Pix's features, while a blast to use, are things we've seen before in other separate apps; most contemporary iPhones can do burst photography and the iPhone 6S has its own take on Live Image, called Live Photo.

Also, several third-party image editing apps like Adobe Photoshop Express have given handheld photogs the ability to make their photos "pop" for ages, with far more control to boot.

That all said, we loved saving time not having to jump between apps. What's more while, Apple's Live Photo only exists on the iPhone 6S, Pix is compatible with most iOS devices made in the last three years.

While Pix falters with limited controls - we can't trigger Live Images if Pix doesn't think there's anything interesting to show, and the custom editing features are pretty slim - it's hard to beat the sheer amount of time saved between pressing a button and getting a great photo primed for social media.

Like most camera apps, it won't replace good lighting or composition skills, but let's say you're taking a quick picture with your favorite author at a book signing, grabbing a shot of your kid's winning goal, handing over your phone to a not-so-tech-savvy family member, or any other scenario where you may not have the time to line up the perfect shot - that's where Pix shines.

We would like a little more control, but Microsoft is really onto something here, so here's to hoping it makes its way to Android and Windows 10 Mobile so they too can enjoy fire-and-forget quality snaps in no time.