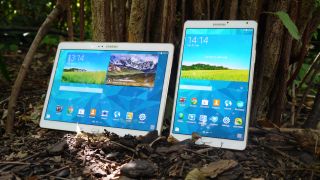 Oh look, Samsung hasn't forgotten about tablets after all

Samsung has been on a bit of a hiatus when it comes to releasing Android tablets, but it looks like the Korean company is getting back in the game with rumours claiming that it is working on four new devices.

Little else is known about these new devices, although we probably won't see them until later in the year.

Any coming in Q4 will likely ship with Android 5.0 Lollipop out of the box. Which would be nice. However it does mean that those tablets are unlikely to show up at MWC in March. Which isn't nice.

Still, we might see one or two at the big Barcelona show, so hold tight.