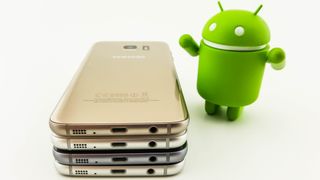 USB Type-C is the future of Android connections for data and power, yet the new Samsung Galaxy S7 doesn't bother to include this connection type.

It's a curious decision when the LG G5, also announced at MWC 2016, uses the port, and we've seen the same from the Nexus 5X, Nexus 6P and OnePlus 2.

The benefits are undeniable: USB-C is small, reversible and powerful, and it would take the likes of a big player the size of Samsung to really smooth out the transition from micro USB.

None of that swayed Samsung, however, and when we sat down with Shoneel Kolhatkar, the company's Senior Director of Product Marketing, we found out the surprising reasons why it made the decision.

1. Samsung Gear VR is to blame (or thank)

The burgeoning VR platform Samsung is actively pushing was the first, and most unexpected reason why the company hasn't adopted USB-C.

"It's because of our Gear VR ecosystem story. The Samsung Galaxy S7 plugs into your Gear VR, which has micro USB," said Kolhatkar.

"We want to make sure people who bought the headset six months ago aren't disappointed and it works."

That makes a lot of sense. It would be a tight and awkward squeeze to try to fit any sort of USB-C-to-micro USB adapter in the headset. The Samsung Gear VR consumer edition only just came out too, so it's nowhere near time for a USB-C refresh.

This was the more obvious answer. Samsung is giving our dozens of micro USB cables a proper sendoff with the Samsung Galaxy S7.

"More broadly speaking, we don't feel the market is ready yet," Kolhatkar told us. He's right, and it didn't take much to point this out.

Sitting there in the interview room were my USB-C-touting Nexus phones, but also a bunch of other gadgets that require micro USB.

I had a pair of Astro A38 Bluetooth headphones around my neck which charge via micro USB, and a GoPro Hero4 Session on the table which also charges and transfers via this older connection.

It's true that the Samsung Galaxy S7 uses the non-reversible micro USB cable, and it can be a pain to plug it in when it's dark versus a phone that uses an omnidirectional USB-C cable.

However, Samsung has the other big benefit of the new Type-C standard already: fast charging, which can take battery life from 0% to 30% in about 30 minutes.

"Some of the advantages of USB Type-C, like Fast Charging, we already offer," noted Kolhatkar. "It has extremely fast charging, and we offer that in the Samsung Galaxy S6 as well."

That's a fair point, as Samsung has some of the lowest (and therefore best) recharging times in our battery tests, and it also supports wireless charging.

There's no denying that USB-C is the next-generation port for our smartphones, tablets and laptops, and all of their accessories, but it's a rough transition right now.

"We don't feel we should force USB-C on this device, and have consumer run out and buy adapters and buy chargers," concluded Kolhatkar.

Micro USB is still going to be the mainstream Android cable for all of 2016 and most of 2017, and it certainly sounds like Samsung knows it.

The company is at a point where it's almost giving away Samsung Gear VR headsets for free to get it on as many heads as possible. It's on its way to becoming the defacto virtual reality platform, and Samsung doesn't need USB-C to complicate that plan.

The company is, quite wisely, letting LG and others do the heavy lifting in the USB-C transition. It's likely waiting for a redesigned Samsung Galaxy S8 in 2017 to pull the plug on micro USB.