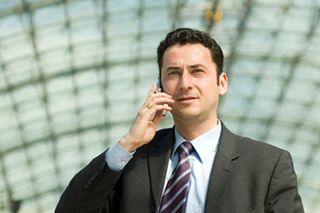 Yah, Giles - I just got flashed at over four million times a second

We've seen light used as a way to transfer information in public settings before, but very little of such technology has made it off the drawing board recently. Nevertheless, there are high hopes for a new method using LEDs to speak to mobile phones.

The technique comes from NEC and Toshiba, whose researchers are suggesting that flashing LEDs embedded in advertising hoardings could easily transmit binary data containing relevant information to phone cameras.

While there are already any number of ways of transferring information to phones, the LED method would have an advantage in that it could stream a limitless amount of data.

Conversely, barcodes – whether one- or two-dimensional – are restricted in how much they can hold by their size. Light strobing on and off up to four million times a second could clearly convey considerably more.

The companies say they hope to commercialise some version of the LED system by 2013, almost certainly in Japan at first.