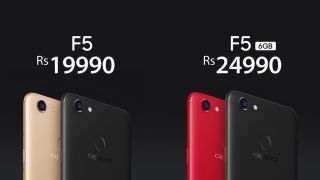 After launching the F5 in Philippines on October 26, Oppo today launched the selfie phone in India. The highlight of the event was the Facial unlock and the AI Beauty Technology which the company claims as the first AI based beautifying technology in India.

Following the big-screen trend, the Oppo F5 features 6-inch full HD+ display resolution (2160x1080p), aspect ratio of 18:9 and a screen to body ratio of 84.2 percent. Powered by an octa-core MediaTek MT6763T processor, the phone will come with 4GB and 6GB RAM variants with an internal storage of 32GB and 64GB respectively. The storage is expandable upto 256GB via microSD card, and two nano-sims. It runs on ColorOS 3.2 based on Android 7.1 with a battery capacity of 3200mAh.

Oppo F5 is the latest addition to the company’s selfie expert series after Oppo F3. In continuation, the company has launched the F5 with a 20-megapixel front sensor measuring 1/2.8-inches with a f/2.0 aperture and the AI Beauty Technology. The technology includes a database of human faces from around the world which captures the details of the user on the basis of the skin tones, gender, age etc. thus giving the best selfies to the user. In addition to this, the phone can identify more than 200 facial recognition spots while clicking selfies and has a customized beauty effect. It has a 16-megapixel primary sensor with an aperture size of f/1.8. It also has a fingerprint sensor placed below the camera lens at the back.

The other features of the phone include Game Acceleration, Facial Recognition, Split Screen and O-Share which is claimed to be 100 times faster than Bluetooth. For connectivity, the phone has 4G VoLTE, Wi-Fi 802.11 a/b/g/n, USB and GPS.

Apart from this, Oppo also announced the launch of Oppo F5 Youth which it will start rolling out from December onward. The phone will also feature the same  6-inch full HD+ display and AI Beauty Technology. We earlier reported that the Oppo F5 might be launched in three variants and with this announcement, the news has been confirmed.

While the sale starts from Nov 9, the phone can be pre-ordered on Flipkart starting today till Nov 8. The 4GB and the 6GB variant of the phone are priced at Rs 19,990 and Rs 24,990 respectively. The former will be available in Black and Gold and the latter will be sold in Black and Red.