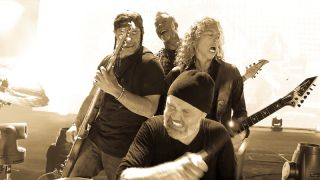 After 16 years, Metallica have finally given their permission for their library to appear in full on Napster, a service which the band famously sued back in 2000.

Times have changed. Back then Napster was a peer-to-peer music download service which allowed its users to share music with each other. In practice this meant that its users could download music without having to pay anything, allowing the software to act as an enabler for piracy.

Nowadays music streaming services like Spotify, Tidal, and Apple Music are increasingly popular ways of listening to music, and the Napster name has been used to rebrand Rhapsody, a lesser known streaming service.

Loudwire reports that streaming services now account for almost half of revenue in the music industry, so it makes sense for Metallica to follow the money.

In the years since the lawsuit, Lars Ulrich has claimed that Metallica’s issue with Napster wasn’t about the money, but was instead about control of the band’s music catalog.

Now that Napster is going through the proper channels to gain the rights to distribute Metallica’s music, the band is willing to make its music available.