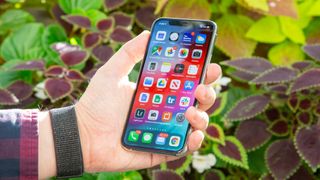 The iPhone 12 Pro could have a better screen than the iPhone 11 Pro Max, above (Image credit: Future)

When you think of the next iPhone Pro, you probably don’t imagine it being cheaper than the iPhone 11 Pro, but there’s a chance it could be. Or, at least, one component might be, as well as being better.

Specifically, ETNews (a South Korean tech news site) claims, citing “the industry”, that the iPhone 12 Pro and iPhone 12 Pro Max will both use Y-OCTA OLED screens from Samsung. Most OLED screens (including those used by current iPhones) require a separate touch-sensitive layer, but Y-OCTA ones don’t, which makes them both thinner and cheaper to make.

There’s no guarantee those savings will be passed on to consumers of course, but it’s possible. And while the difference in thickness will be negligible, it could mean the iPhone 12 Pro is a slightly slimmer device overall, or alternatively it might free up a tiny bit more space for a larger battery or other components.

On top of all that, the use of fewer layers in the screen could also potentially reduce glare. So it sounds like a beneficial change all round.

It’s worth noting though that apparently it’s only the Pro models that will use this display tech. The basic iPhone 12 will apparently use an OLED screen that does have a separate touch-sensitive layer.

That might seem odd since the Y-OCTA version is both better and cheaper, but it likely comes down to supply, as Samsung may not be able to manufacture enough, and supposedly no other company is building the Y-OCTA panels at a quality Apple is happy with.

As ever we’d take these claims with a pinch of salt, especially so far out from the likely September 2020 launch of the new iPhones, but nothing here sounds unbelievable. We’ll be sure to bring you any other credible news and rumors between now and when the iPhone 12 range launches.