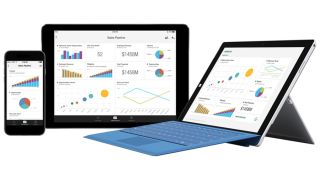 All hail democratised data. Until recently, business intelligence (BI) software was all on-premise and then only for analysts who knew how to code, or those that had the support of data science and IT staff.

But with infrastructure quickly shifting to a cloud model, new cloud-powered BI software is appearing that promises to empower everyone and anyone within an organisation to work with data directly, in real-time. Is cloud BI really the democratisation of data, or too good to be true?

Why is cloud BI appearing?

Gartner predicts that the BI market will to grow by 8.7% per year until 2018, and with a good chunk of the BI industry now migrating to the cloud, BI's 'cloudification' makes sense.

"Broadly speaking, cloud BI tends to go hand-in-hand with an organisation's IT infrastructure move to the cloud," says Nat Van Gulck, Business Intelligence Solutions Manager at Trustmarque. Cloud BI is typically all-you-can-eat, it's self-service, it's pay-as-you go, it's dashboards, reports and data visuals. It's whatever you want, when you want it.

That's the theory, but the reality is that putting BI on the cloud is one big experiment that has only just begun.

Cloud BI: The argument in favour

Cloud BI is about taking the IT out of data analytics and saving money. "Cloud BI eliminates the need for businesses to invest in heavy infrastructure or dedicate much of their IT team's time to managing the environment," says Nick Whitehead, Senior Director, Oracle Business Analytics & Exalytics EMEA. "Adopting and managing the latest business analytics capabilities in the cloud is also much simpler and faster, as companies can instantly take advantage of new innovations that vendors rollout to the market 'cloud-first'."

We're talking self-service and very visual analytics – think instant reports and summaries that can be easily integrated into another, previously isolated, dataset – that the IT department never have to get involved with.

Increasing the breadth of BI

Doing BI on the cloud is more efficient, flexible and stable compared to server-based tools, but just as persuasive is the ability to both share critical business insight, and to integrate it.

"It empowers users to pervasively share BI analysis across the enterprise," says Peter Baxter, MD EMEA at Yellowfin, which is now working with Microsoft Azure to deliver free cloud BI available via the Azure marketplace.

"These capabilities enable organisations to rapidly deploy various different virtual BI instances in parallel across the company, creating an interwoven fabric of data," says Southard Jones, VP of Product Strategy at Birst. "This enables companies to bridge the divide between centralised and decentralised analytics and drive more analytics to more users, rapidly."

Everything has a centre of gravity, but where is it for the data in your organisation? The chances are, that centre-point is on the move. "Business intelligence solutions gravitate close to an organisation's largest data stores," says Van Gulck. Doing the analysis close to the data's location means reduced direct analysis query times, while transfers into a data warehouse can be much cheaper to run.

"As the data gravity continues to shift towards cloud-hosted infrastructure, we expect a corresponding increased uptake of cloud BI solutions," says Van Gulck.

Amazon QuickSight is a newly launched cloud-powered BI service that offers customers of AWS quick and easy visualisations of their data, such as graphs, tables and stories. It's aimed at everyone in an organisation, not just data scientists.

"Non-technical builders also want to be able to understand what's going on with the data, get those insights, and turn them into actions," said Andy Jassy, SVP, Amazon Web Services, when launching the product during October's AWS Re:Invent 2015 in Las Vegas. "And the technical people want the business people to do that so it takes away some of their ticket-load."

Jassy also stated that Amazon QuickSight would be a tenth of the cost of traditional BI software, which he called "kinda janky". It's all driven by SPICE, a parallel, in-memory calculation engine. "As soon as we recognise an AWS customer we take all their data in the various AWS data stores and we move it to our query data so they get their first data visualisation in 60 seconds," Jassy explained.

Generating reports quickly, and more visually, is great, but cloud-only tools like QuickSight are necessarily limited. "QuickSight can only visualise data in specific AWS data sources," says Jones. "Not every application is hosted in the cloud today, and not all information can be migrated over … a complete cloud BI solution handles visualisation and data – and can extract data from anywhere, cloud or on-premise – and also live query it anywhere, too."

In short, Amazon QuickSight is great for projects and pilots. But is it the future of BI? Not yet.