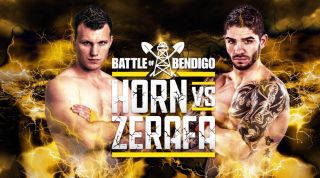 Its a big night for Australian fight fans as compatriots Jeff Horn and Michael Zerafa go to toe-to-toe in Victoria. Former WBO welterweight title holder Horn will be putting his WBA Oceania Middleweight belt on the line for tonight's fight, and will be facing a fellow Aussie that's far from the journeyman usually placed in front of a fighter with an eye on a world title fight.

You can watch all of the action from the comfort of your own sofa from anywhere in the world with our Horn vs Zerafa live stream guide below.

When is the Jeff Horn vs Michael Zerafa fight?

What date is it? The fight is set for Saturday, August 31

What time is it? The action is set to unfold from 8pm AEST local time, so that's 3am PT and 6am ET in the US and 11am in the UK

Where is it? The 4,000 capacity Bendigo Stadium sports and entertainment centre in Bendigo, Victoria

Horn, a domestic boxing hero, is probably best know worldwide for his controversial points win over Manny Pacquiao back in 2017 which saw him unseat the then WBO welterweight champ. Having lost his title to Terence Crawford a year later, Horn has since moved to middleweight, and will have his eye on a late December title fight with WBA middleweight champion Ryoto Murata in Japan that has been agreed in principle.

Zerafa, an Olympic gold medal winner at London 2012, has a strong pedigree, having only lost to top draw opposition (e.g. Peter Quillin, Kell Brook, Arif Magomedov) and will be hoping for complacency from his opponent.

To ensure you can see the whole thing in real time so you don't miss any of the action, we've put together this guide to help you watch a Horn vs Zerafa live stream. As with most boxing, it's not always available in every country so you may find a VPN is the best way to stream the fight, which you'll find out all about below.

How to watch Horn vs Zerafa in Australia

The Horn vs Zerafa fight is being shown exclusively on Main Event as a pay-per-view in Australia via Foxtel and Optus. It'll set you back $49.95, with build up coverage beginning at 7pm. Yep, this one's all about the PPV, we're afraid.

If you're desperate to watch this clash but have mistimed your holiday or trip abroad, then keep reading to see how to watch from abroad.

How to live stream Horn vs Zerafa from outside your country

But if you're abroad this weekend then you'll need another way to watch and avoid possible geo-blocking. That's where using a VPN comes in, as it's a legitimate way to watch the coverage without having to resort to some dodgy illegal stream you found on Reddit that may leave your laptop or mobile unsafe.

Short for Virtual Private Networking, it's an ideal piece of software that allows you to change your IP address so you appear to be in a completely different location (i.e. one that's actually showing the boxing).

They're are also really handy if you're concerned about streaming safely on the web, thanks to the encryption they use to hide your details. And the best won't log your personal information, either. We've tested hundreds of VPNs and can recommend these as the best VPN services currently available:

1. Express VPN (comes with a 30 day money back guarantee)
This is the #1 rated best VPN in the world right now. You can watch on many devices at once including Smart TVs, Fire TV Stick, PC, Mac, iPhone, Android phone, iPads, tablets etc. Check out Express VPN and get 3 months FREE with an annual plan

2. NordVPN: one of the most affordable VPNs out of the big guns and no less impressive for it

3. IPVanish supports up to 10 devices, so great on the go and super secure.

We've scanned the listings in other countries and can't see anybody else that's showing the boxing in the likes of the UK, US or anywhere else. So a VPN may come in handy there, too.