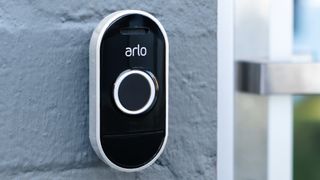 Update: An Arlo spokesperson told TechRadar that a new update to the Arlo iOS app should fix issues with calls being patched through to smartphones. You can find out more about the 2.10 update on the Arlo Communities forum. The original story follows below.

Smart home security brand Arlo has responded to claims that its Audio Doorbell isn't playing nicely with Apple, with iPhone users complaining that the doorbell no longer calls their smartphones when somebody is at their door.

Customers have flocked to the Arlo Community forums, with one user reporting that the problem started when they updated their iPhone to iOS 13, Apple's latest operating system.

Another iPhone user revealed that, despite sending motion-activated notifications to their phone, their Arlo Audio Doorbell was not calling their phone.

In response to the reported issues, Arlo told TechRadar that it's aware of the issue and is working to resolve it. The full statement reads : "Our team is aware of the issue where pressing the Arlo Audio Doorbell does not ring iOS devices that are using iOS 13. With the new iOS 13 update, Apple changed the way SIP calls are handled and, as a result, Arlo Audio Doorbell calls no longer connect to iOS devices when the Arlo app is running in the background."

"We know how frustrating this is, and our developers are working to get expedited approval from Apple so that we may deploy an update to the Arlo App as soon as possible. We appreciate your patience and understanding as we work to resolve this issue."

SIP (Session Initiation Protocol) allows users to make voice and video calls over an internet connection, without the need for a mobile provider – this is the tech that allows smart devices like the Arlo Audio Doorbell to call users' smartphones.

If iOS 13 has changed the way SIP calls to iPhones are handled, it could be a plausible explanation for the problems some Arlo customers are experiencing.

However, a little digging into the Arlo Community forums reveals that, not only are iPhone users who haven't upgraded to iOS 13 having the same problem, but some Android users are also not getting calls from their Arlo Audio Doorbell.

Having just announced its first ever video doorbell, these issues could pose a problem for Arlo. The Arlo Video Doorbell, which could become a big rivals for the Ring Door View Cam, is "designed to capture what traditional video doorbells can't," with a vertical field-of-view that gives you a bigger, more precise picture of your front porch.

Of course, that vertical field of view is no use if you aren't actually alerted when visitors ring your doorbell, whether you're using an iPhone or an Android.