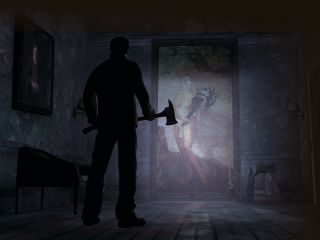 How do you scare a god? Make no mistake, that's what we are in horror games. We can't be hurt. We can't be killed – at least not for more than a few seconds.

We know it's all just a game, and any time we want, we can just turn the lights on and calm down with a bootleg copy of Sesame Street.

Experiences that in real-life would have us in therapy for decades are just another level to be conquered. And yet, done properly, there's nothing quite like a scary game – nothing that sticks in the mind more than that sheer sense of fear, of revulsion, of fighting through the mental pain barrier and setting foot in the spider's lair, or through the facehugger infested corridor, or opening that sinister door with the scratching sounds on the other side.

Horror has power too, and developers have never shied away from using it. Settings, genres and graphics aside, there are several basic ways to scare a player.

Most blatantly, there's the traditional ooga-booga routines of something lurching out of the darkness with slathering jaws and a mind to kill. The most effective of these in recent years is Monolith's Condemned, which started off with psychopathic bums and reached its zenith in the sequel with a giant bear on the rampage.

The first real example of this style, however, came back in 1982, with 3D Monster Maze; the monster being a T-rex that hunted you down as you tried to find the exit. The graphics were simple, but the real power came in the little text bar that silently warned: "He is hunting for you…" or "Footsteps approaching…"

Demons of the night

Easily the most terrifying of the jump-scare monsters are the 'face attack' type. There are two basic kinds, both incredibly intimidating. The first is a monster that gets right into your face, biting or whacking at it with some kind of limb or tentacle – usually some horribly mutated, moaning horror you'd much rather keep at a distance, or something with some atavistic horror element to it, like a giant spider or a rat.

Quake had The Fiend, the first time this had been done in 3D. The more refined Half-Life 2 uses two different types of headcrab to get this effect: the regular ones, which take off a bit of damage and then bounce off, and the black 'poison' headcrabs. These are particularly evil because they can't kill you, only sap your health, letting Valve's designers use them wherever they think will be scariest. See a crate? Smash it. Ooh, hea-POISON HEADCRAB ATTACK!

Your high-pitched scream is the designer's reward. Far worse, however, are the outright facehuggers, named after the most terrifying alien from the Aliens vs. Predator series. We don't see many of these – thankfully, because for many people (including your humble writer) they're a game-killer.

One minute you're happily walking along, the next your screen is entirely filled with a slurping horror, and your wireless mouse is arcing through the window. No other game has had anything quite so horrible, although we've seen disembodied hands, slime monsters, and a few other attempts in other games.

Oddly, the most recent of these turned out to be built around a very different kind of hug - Alma, the psychic villain of FEAR 2, would often spring out of nowhere to try and absorb your character into her, kicking off an impromptu Quick Time event as you struggled to push her off. Still creepy, but mostly annoying. Especially since if you read FEAR 2's backstory, it's hard not to be on her side.

Snakes. Why'd it have to be snakes?

The problem for games built around short sharp shocks is that eventually, you get used to them. Doom 3 for instance made heavy use of 'monster closets': sealed off bits of the map that would open up as you walked through rooms or grabbed items.

The first couple of times a snarling demon leaps on you is scary, but if the game keeps pulling the same trick, you start expecting it. The more times you beat an enemy, the less scary it is. The further you get into a game, the more likely it is that you're tooled up to deal with it. Likewise, the more times you die to something, the more it sinks in that no, you're not really in any danger.

The smart horror games anticipate this, especially the action games. There's a distinct competence curve built into the genre, which usually means that you stumble around for a few levels effectively unarmed and prey to everything with fangs and talons, then slowly tool yourself up until you're ready to take the action to the enemy.

This usually brings a genre shift along with it, either into straight shooting for FPS games, or some way of widening the story. Realms of the Haunting, for instance, begins as a straight haunted house mystery complete with spooky typewriters rattling out gibberish and rooms filled with dead rats, but quickly turns into a fantasy story about demons and the apocalypse.

Clive Barker's Undying does something similar, only with time travel and a series of cackling mini-bosses lining up in an endless shooting gallery. Whatever the case, while the opening level will usually be whichever 'Them' is responsible for the day's chaos invading your world/life (metaphorically or not) in some overpowering way, while the ending will usually be you ramming rockets down their leader's throat, probably at the seat of his power.

For adventure games, like Phantasmagoria or I Have No Mouth But I Must Scream or Sanitarium, replace the guns with discovering what the baddie is up to, and finally pulling apart whatever they're trying to achieve with all the ooga-booga nonsense.

Either way, the hunted almost inevitably becomes the hunter because it's only so much fun being the prey. There are exceptions to the rule, like Silent Hill 2, but not very many.