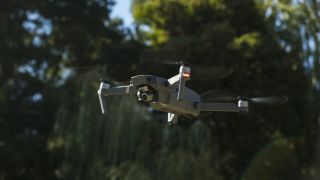 DJI is hosting an event on May 24, with all signs pointing to its smallest drone to date touching down amidst the gathered media (not literally, we imagine).

On the heels of its well-received Mavic Pro drone, chances are good DJI will introduce an even tinier flier, one that could come in at a lower price than the $999 (£999, AU$1,689) Mavic Pro.

As noted by The Verge, a shrunken version of the Mavic Pro, believed to be called the Spark, was spotted on the company's Chinese forums at the beginning of April. That page is no longer up, but DJI also holds a trademark for the Spark name, which only backs up the rumors.

DJI impressed us with the Mavic Pro, which despite its smaller stature still packed in advanced features as well as a few new ones that made the quadcopter more accessible, and that's no small feat.

We imagine DJI will look to repeat the same successes with the Spark, though accessibility and portability would, presumably, be even easier to achieve in a drone that much smaller.

We'll see what DJI has planned on May 24, but until then check out this purported video of the Spark in (really short) action.