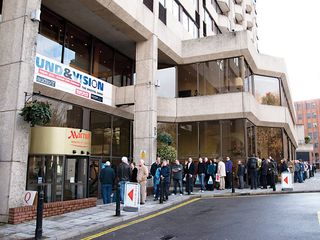 With all the exhibition space sold there was a buzz about the 2011 Bristol Sound & Vision show before it had even started. A buzz which rose to fever pitch when the massed audio enthusiasts burst into the Marriott foyer on the first day.

This show has grown in importance to the point where it is the most popular in the hi-fi events calendar. The driving force being the array of key manufacturers showing their latest wares.

This year's theme was clearly affordability. There was definitely some high-end exotica in action at Bristol, but even more keenly priced components and accessories.

Three cable manufacturers revealed radically revised designs with one coming straight out of left field. Speaker makers, meanwhile, have been revisiting the sub-£200 sector with renewed enthusiasm, which has to be good for newcomers to the pursuit.

Computer audio solutions were clearly in the ascendant and there can't be many electronics companies left that don't offer a USB input on their DACs. Several, including Cyrus, Electrocompaniet and XTZ, have gone a long way to provide a hassle-free, sonically rewarding result. So expect some review surprises soon.

Here's our pick of the best gear that was at the show.

Chord has made a breakthrough with its phono plugs that is so dramatic that it has applied it to the entire range, save for the very top-end cables.

The new plug, dubbed VEE for 'vibration eliminating enclosure', is made from ABS plastic and replaces the metal outer casing on both digital and analogue cables. The connectors within are still silver or gold-plated with Teflon insulation, but the difference between the standard and VEE casings was nothing short of dramatic in Chord's demo.

Chapter Electronics is a British company that made its name with high-end switching PSU-based amplifiers. With the Paperback series it is trickling down this high-end technology to a more affordable level.

The Foreword CD player is a slot-loader with a multi-input DAC and Chapter's ultra low-phase noise clock and a balanced output stage, it also has a volume control and costs £3,995. The range also includes two-, three- and five-channel Paperback class D power amps each delivering 200 watts per channel. Prices start at £2,995.

Streamline (£1,600) is the all in-one Naim Unitiqute competitor with a 30-watt power amp, five digital inputs and a USB connection. Like its range-mates it can stream wired or wirelessly up to 24-bit/96kHz and incorporates a second-gen XP preamp. These can be hooked up to a NAS drive and run from an OLED display n-remote for full streaming operation without a Wi-Fi network.

The Stream X (£1,400) is the minimal list option with no volume control and only digital output, while the XP is the £2,000 range- topper with high-quality DAC and second gen XP preamp onboard.

This drive unit benefits from experience the company has had with the Murata Sphere supertweeter and because it's made specifically for WB's Geometry range, the designers has managed to reduce moving mass by a third compared to the Scanspeak used previously. It has side ventilation rather than rear-ward ala Bowers & Wilkins and output extends beyond 30kHz.

Scandinavian speaker-meister Dali followed KEF's footsteps by showing a concept project at Bristol, a speaker built purely to show what the company is capable of with no holds barred.

The ME9 is a very curvy and high-tech floorstander with a two-part composite construction and a curved front baffle that aims to focus five drivers at the listener's ears. Dali has built all the drivers specifically for the ME9 and these include a 45mm treble dome and a ribbon supertweeter, alongside two ten-inch bass drivers and a pair of six-inch wood pulp mids.

6. Ken Ishiwata With Boston A Series

Hi-Fi guru Ken Ishiwata has been working with speaker wunderkind Karl Heinz Fink on Boston's new entry-level A range. This 'European' input was chosen to give the speakers a worldwide appeal according to KI who showed us three bookshelf models starting at £169 for the A23 and two floorstanders that culminate in the £599 A360.

The range uses polypropylene main drivers for their consistency alongside softdome tweeters. The range's subtle styling is courtesy of industrial designer Kieron Dunk and you can have any colour you like so long as it's black or white.

Sounding Italian, but hailing from Germany the £1,749 Barzetti is the latest and most affordable design from Acoustic Signature. Supplied complete with a Rega RB301 arm this superbly finished turntable has a six-kilo aluminium platter and is available in gloss black or white.

The motor is run by an S Alpha electronic controller which is said to isolate the drive from variations in the mains. The bearing is hardened and polished steel in a sintered bronze shaft with a Tidorfolon base. We've not seen a tidier turntable for less.

Chord's cute Chordette range has been supplemented by a newcomer called Maxx. This £800 (plus £140 PSU) DAC receiver manages to cram two channels of 40-watt class A/B power, a Bluetooth APTx receiver and digital-to-analogue convertor into its 160mm width.

Chord is excited by Bluetooth APTx being incorporated into the Android operating system and the likelihood that conventional Wi-Fi networks will be replaced by this system in future due to its considerably greater efficiency.

For reasons unknown Exposure has never made a standalone DAC until now. The 2010S2 is a six-input, Wolfson-powered convertor, which will cost around £700.

Unusually, it eschews RCA phono coaxial connections in favour connector is a proper 75-ohm interface and thus is the right way to do things, especially as the matching 2010S2 CD player has the same socket. It also has digital volume control, headphone output and a USB input.

Spendor has reduced the entry level for a floorstander by £400, with the sub-compact A3 at £1,295. This two-way comes in real-wood veneer and sports a 110mm main driver and 22mm-wide surround tweeter.

It's joined by the latest variant on Spendor's long-running bookshelf, which is called the S3/5R2 (£850). The main driver here has been re-engineered with a new magnet and phase corrector. It also has the wide surround tweeter and, thanks to its sealed box nature, can be wall or shelf-mounted.