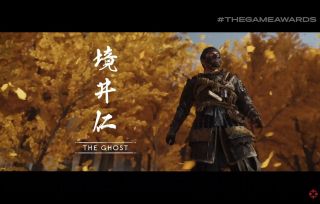 Ghost of Tsushima will land on our PlayStation consoles in "summer 2020" (so June-August), with the release window confirmed in a new, extended trailer at The Game Awards on December 12.

The PS4 exclusive has generated a lot of hype for its high-fidelity visuals and stealthy samurai action, and the latest trailer certainly delivers on that promise.

Sony used its State of Play live stream a few days earlier to drop a brief teaser trailer, though it turned out to be just a snippet of this longer montage of beautiful forests, burning villages, and moonlit assassinations – not to mention horse-riding through stunning natural vistas, bringing to mind the likes of The Witcher III or Breath of the Wild.

You can see the new trailer in full here:

In a post on the PlayStation blog, Sucker Punch's Andrew Goldfarb wrote: "Today, we debuted a brand-new trailer that delves deeper into the identity our hero is forced to adopt in order to save his home: The Ghost. While Jin starts our game as a samurai, he’ll learn skills and adopt tactics that are decidedly not samurai-like, and you can get a small taste in the footage we revealed today.

"In the months ahead, we’ll share more about Jin, the threats he faces, the allies that help him along his journey, and what he’ll have to give up to become this new kind of warrior."

This wasn't the only announcement to come from The Game Awards 2019, though. We got the name of the next-gen Xbox console, the Xbox Series X – not to be confused with the Xbox One X – as well as reveals for PS5 exclusive Godfall, a release date for Amazon's MMORPG New World, and a new Ultimate Rival sports game for Apple Arcade.